Just printing hello world is not enough, is it? You want to do more than that - you want to take some input, manipulate it and get something out of it. We can achieve this in Python using constants and variables, and we'll learn some other concepts as well in this chapter.

Comments are any text to the right of the # symbol and is mainly useful as notes for the reader of the program.

Use as many useful comments as you can in your program to:

Code tells you how, comments should tell you why.

This is useful for readers of your program so that they can easily understand what the program is doing. Remember, that person can be yourself after six months!

It is called a literal because it is literal - you use its value literally. The number 2 always represents itself and nothing else - it is a constant because its value cannot be changed. Hence, all these are referred to as literal constants.

Numbers are mainly of two types - integers and floats.

An example of an integer is 2 which is just a whole number.

There is no separate long type. The int type can be an integer of any size.

A string is a sequence of characters. Strings are basically just a bunch of words.

You will be using strings in almost every Python program that you write, so pay attention to the following part.

You can specify strings using single quotes such as 'Quote me on this'.

All white space i.e. spaces and tabs, within the quotes, are preserved as-is.

Strings in double quotes work exactly the same way as strings in single quotes. An example is "What's your name?".

You can specify multi-line strings using triple quotes - (""" or '''). You can use single quotes and double quotes freely within the triple quotes. An example is:

This means that once you have created a string, you cannot change it. Although this might seem like a bad thing, it really isn't. We will see why this is not a limitation in the various programs that we see later on.

There is no separate char data type in Python. There is no real need for it and I am sure you won't miss it.

Sometimes we may want to construct strings from other information. This is where the format() method is useful.

Save the following lines as a file str_format.py:

Observe the first usage where we use {0} and this corresponds to the variable name which is the first argument to the format method. Similarly, the second specification is {1} corresponding to age which is the second argument to the format method. Note that Python starts counting from 0 which means that first position is at index 0, second position is at index 1, and so on.

Notice that we could have achieved the same using string concatenation:

Also note that the numbers are optional, so you could have also written as:

We can also name the parameters:

What Python does in the format method is that it substitutes each argument value into the place of the specification. There can be more detailed specifications such as:

Since we are discussing formatting, note that print always ends with an invisible "new line" character (\n) so that repeated calls to print will all print on a separate line each. To prevent this newline character from being printed, you can specify that it should end with a blank:

Or you can end with a space:

What if you wanted to specify a two-line string? One way is to use a triple-quoted string as shown previously or you can use an escape sequence for the newline character - \n to indicate the start of a new line. An example is:

One thing to note is that in a string, a single backslash at the end of the line indicates that the string is continued in the next line, but no newline is added. For example:

If you need to specify some strings where no special processing such as escape sequences are handled, then what you need is to specify a raw string by prefixing r or R to the string. An example is:

Always use raw strings when dealing with regular expressions. Otherwise, a lot of backwhacking may be required. For example, backreferences can be referred to as '\\1' or r'\1'.

Using just literal constants can soon become boring - we need some way of storing any information and manipulate them as well. This is where variables come into the picture. Variables are exactly what the name implies - their value can vary, i.e., you can store anything using a variable. Variables are just parts of your computer's memory where you store some information. Unlike literal constants, you need some method of accessing these variables and hence you give them names.

Variables are examples of identifiers. Identifiers are names given to identify something. There are some rules you have to follow for naming identifiers:

Variables can hold values of different types called data types. The basic types are numbers and strings, which we have already discussed. In later chapters, we will see how to create our own types using classes.

Remember, Python refers to anything used in a program as an object. This is meant in the generic sense. Instead of saying "the something"', we say "the object".

Python is strongly object-oriented in the sense that everything is an object including numbers, strings and functions.

We will now see how to use variables along with literal constants. Save the following example and run the program.

How to write Python programs

Henceforth, the standard procedure to save and run a Python program is as follows:

NOTE: Whenever you have to provide command line arguments, click on Run -> Edit Configurations and type the arguments in the Script parameters: section and click the OK button: 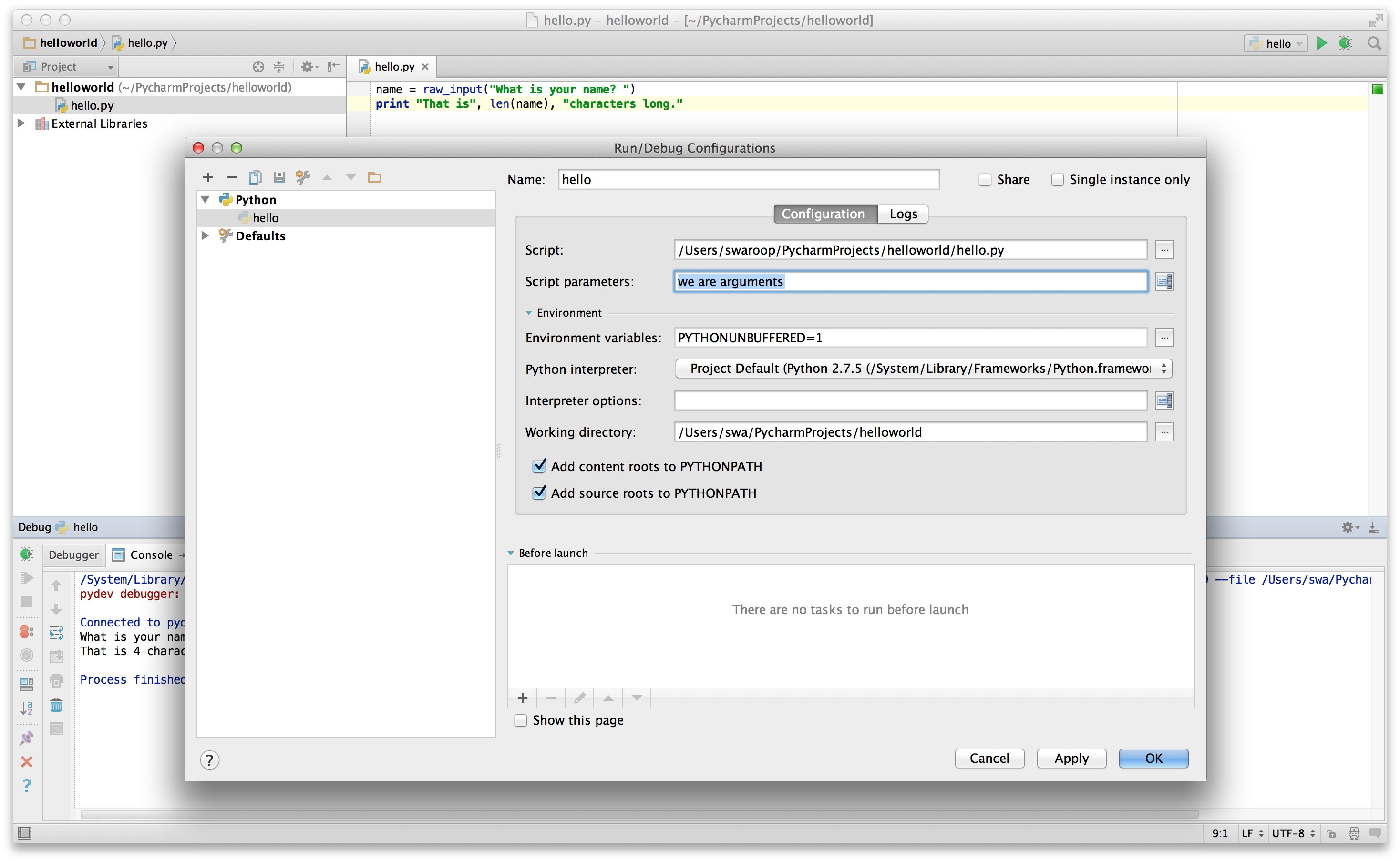 Type and run the following program:

Then we add 1 to the value stored in i and store it back. We then print it and expectedly, we get the value 6.

Similarly, we assign the literal string to the variable s and then print it.

Variables are used by just assigning them a value. No declaration or data type definition is needed/used.

An example of a logical line is a statement like print('hello world') - if this was on a line by itself (as you see it in an editor), then this also corresponds to a physical line.

Implicitly, Python encourages the use of a single statement per line which makes code more readable.

If you want to specify more than one logical line on a single physical line, then you have to explicitly specify this using a semicolon (;) which indicates the end of a logical line/statement. For example:

is effectively same as

which is also same as

However, I strongly recommend that you stick to writing a maximum of a single logical line on each single physical line. The idea is that you should never use the semicolon. In fact, I have never used or even seen a semicolon in a Python program.

There is one kind of situation where this concept is really useful: if you have a long line of code, you can break it into multiple physical lines by using the backslash. This is referred to as explicit line joining:

is the same as

Sometimes, there is an implicit assumption where you don't need to use a backslash. This is the case where the logical line has a starting parentheses, starting square brackets or a starting curly braces but not an ending one. This is called implicit line joining. You can see this in action when we write programs using list in later chapters.

This means that statements which go together must have the same indentation. Each such set of statements is called a block. We will see examples of how blocks are important in later chapters.

One thing you should remember is that wrong indentation can give rise to errors. For example:

When you run this, you get the following error:

Notice that there is a single space at the beginning of the second line. The error indicated by Python tells us that the syntax of the program is invalid i.e. the program was not properly written. What this means to you is that you cannot arbitrarily start new blocks of statements (except for the default main block which you have been using all along, of course). Cases where you can use new blocks will be detailed in later chapters such as the control flow.

Python will always use indentation for blocks and will never use braces. Run from __future__ import braces to learn more.

Now that we have gone through many nitty-gritty details, we can move on to more interesting stuff such as control flow statements. Be sure to become comfortable with what you have read in this chapter.